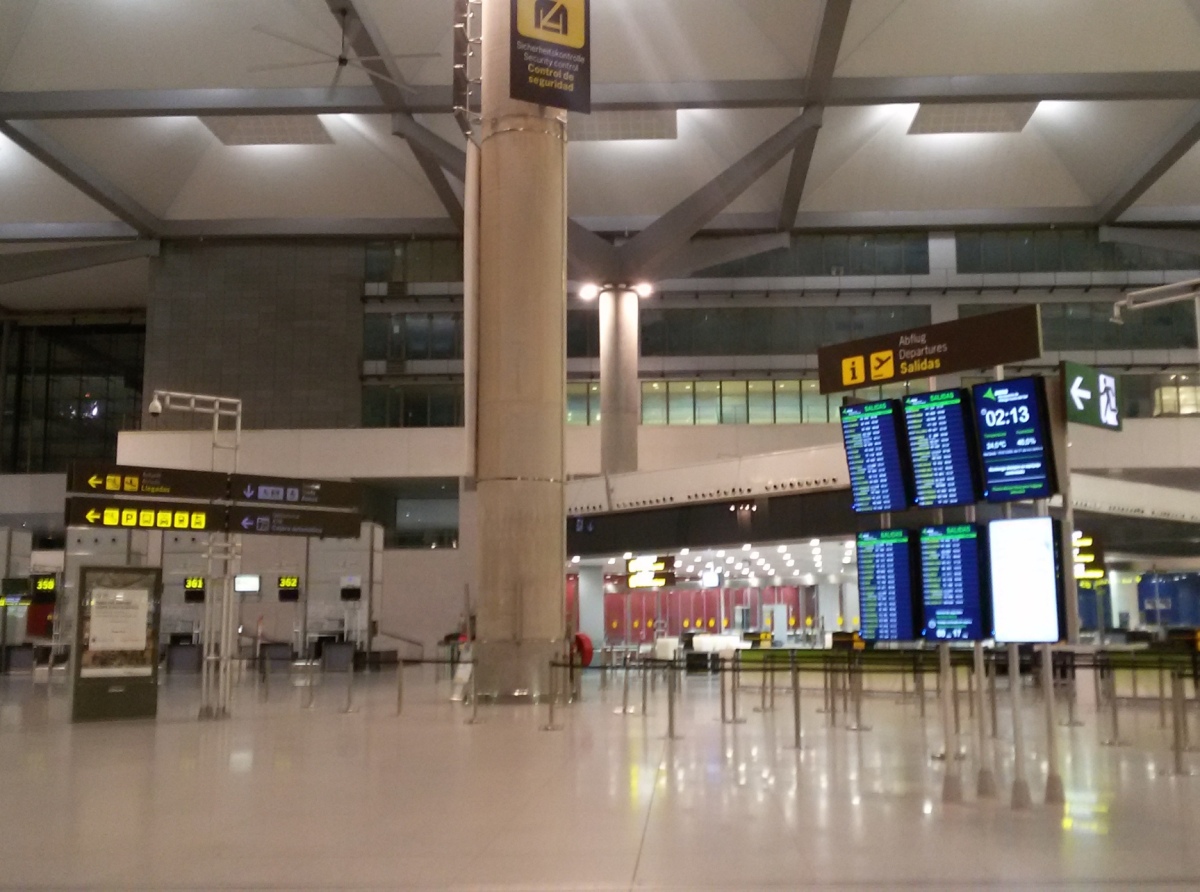 Travellers visiting Spain and heading to the southern cities of Málaga, Marbella and Torremolinos in Costa del Sol or Benidorm in Costa Blanca generally fly into Málaga International airport (AGP), the busiest air passenger terminal in Andalusia which, in turn, connects the city to a wide array of domestic and overseas destinations and boasts an extensive ground transportation network linking it to more than twenty other cities within Spanish territory.

After several remodelling phases, its terminal 1 was closed, thus leaving only terminal 2 (Pablo Ruiz Picasso terminal) and the brand-new terminal 3 operational. The Málaga-Costa del Sol airport complex may, however, be seen as a single building: people can easily get around on foot, even when it is advisable to allow for extra time to arrive at your boarding gate. Take also into account that operations are carried out on different levels: baggage claim and arrivals are located on the ground floor, check-in counters and security filters are found on level 1 and the departures concourse is on level 2. Piers B, C and D can be accessed from the shopping and dining area after confirming your boarding time and gate, typically announced 45 minutes in advance.

During your stay in Málaga-Costa del Sol airport (AGP), you will get the chance to connect your electronic devices to the Aena free WiFi network and enjoy unlimited access to wireless internet after a simple registration process in which you will be asked for your e-mail address, Facebook account or Aena Customer Club password. The service is fast and the signal is strong, with very rare reports of failure or interruption.

Yes, the terminal building of Málaga-Costa del Sol airport stays open during the night and you can stay in the public check-in zone if you have to catch an early morning flight. The security screenings start working and let passengers go through to the departures concourse at 4:00 am approximately. Notwithstanding that, note that only a small Starbucks outlet extends its working hours after midnight and the seating spaces are neither suitable nor comfortable enough to sleep or take a nap, and so we recommend staying in one of the hotels close to Málaga airport in Spain if staying in the area overnight is required.

The passenger VIP lounge in Málaga airport is located on the second level (departures) and available to frequent flyers who are members of loyalty programs like Priority Pass, fly with a business class or first class ticket, or else have purchased an access to spend a maximum of four hours before boarding enjoying its complimentary catering and amenities. It opens at 6:00 am and closes at 11:00 pm every day of the week.

Flights to Málaga in Spain

Aside from two recently incorporated new routes (Tampere in Finland with Scandinavian Airlines since November 3 and London Luton with Ryanair from October 28, 2018), the following seasonal and regular operations currently take place to and from Málaga-Costa del Sol. Although not all have been listed, you can check below whether you can find flights to Málaga from your origin airport.

Restaurants and shops in Málaga airport of Spain

Are you one of those travellers who need their caffeine fix as soon as they arrive in the airport? At the public check-in zones of both the Pablo Ruiz Picasso side (T2) and the new terminal 3, Caffè di Fiore, Starbucks and Coffee Daily have you covered. Otherwise, if you are looking for a pre-flight meal you wish to enjoy calmly and which includes Irish specialties, Spanish tapas and seafood, head over to Four Arrows, Dehesa Santa María or Saboramar in the departures concourse after security before you fly out of Málaga.

For a last-minute shopping spree in the hunt for the latest fashion trends and gifts for your loved ones back home, stop by Victoria’s Secret in Málaga airport, Adolfo Dominguez, GAP, Superdry, Adolfo Dominguez, Desigual, Parfois, Sunglass Hut and the various Duty Free stores located on the airside and the landside.

A guide to San Diego International Airport in California