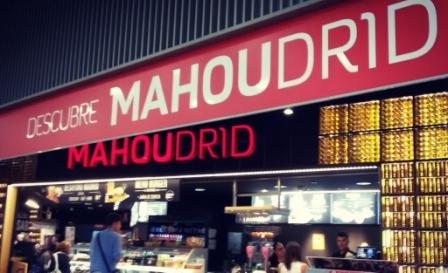 Travellers are spoilt for choice when it comes to eating in Madrid airport (also known as Adolfo Suárez or simply Barajas airport), whether upon arrival or while looking for a quick pre-flight snack to grab and go. In such a large connecting hub with so many people arriving and departing each hour of the day, you may think it will be hard to find somewhere to sit down and have a hearty meal, yet there is such a wide array of bars, coffee places and restaurants offering the most diverse selection of options that all you need to worry about is boarding your plane on time.

Service in most establishments of Madrid airport starts between 6am and 8am (some cafés may even be working at 5), and they remain open until 21pm-23pm. These schedules are subject to modification according to the number of flights being operated on specific dates. If you go for a safe bet and opt for well-known franchises, McDonald’s and Starbucks stay available for travellers in transit at Madrid airport 24 hours a day. Notwithstanding that, you are encouraged to try the Mediterranean specialties, traditional and modern tapas and gourmet cuisine on offer across the terminals.

In this post, we comment on our recommended places to eat at the airport during your trip to Madrid, and provide directions so that you can find them easily in your terminal of arrival or departure.

Snacks and light meals to eat in Barajas airport

When all you need is to buy something to take away or eat on the plane, stop by Deli&Cia near boarding gates H in T4 or gates R and U in T4 satellite: freshly made baguette sandwiches, salads, pasta dishes, cold and hot drinks –all properly packaged to be enjoyed outside- await you. A very similar option for a quick bite in Madrid airport is Eat&Fly in the boarding area A of T1, whereas the Eating Point in both T3 and T4 (next to gates E and J respectively) boasts a broader diversity that includes desserts, fruit, smoothies, yoghourts, meat and wines, ready to be enjoyed on the go.

In spite of being considered as of poorer quality, do not feel discouraged when you see the “Delikia Fresh” vending machines in most areas of Madrid International airport. Based on our own experience, their daily elaborated chorizo, barbecue chicken and Iberian ham sandwiches are really good value for money, plus you may also get chocolate bars, chips and bottled water at a reasonable price along with them if you need to rush to your gate.

*Have you already booked accommodation in the Spanish capital city? Find hotels in Madrid.

The best coffee in Madrid International airport in Spain

You may not be in Italy, yet Madrid Barajas airport is also an ideal spot to have a cup of espresso, cappuccino or cortado. For your daily caffeine fix, head to Lavazza Coffee in the public departures zones of T1 and T4, or the boarding areas C and B in Terminal 1. Madrid airport’s Starbucks are located in the departures concourses of terminals 1, 4 and 4S, find it near gates B, J and S of the corresponding terminal. Caffriccio is an alternative where sweet treats add up to your coffee break: doughnuts, pastries and cake portions will be the best match for your hot drink; to enjoy them, go to the K boarding gates in T4, boarding areas R and U in T4S, or the arrivals public zones of T2 and T4. To indulge in the unmistakable French baked pastries and freshly brewed coffee by Paul, you will need to access the restricted area for passengers in Terminal 4 of Madrid Barajas airport and have time to spare near gates J: absolutely worth it, but do not lose sight of the nearest flight information screen!

Asian food and healthy options before you fly

“Kirei by Kabuki” is a trendy Japanese and Mediterranean fusion restaurant to be found at both T1 and T4, though you will need a boarding pass in order to get a table and enjoy their assorted sushi platters, soups and Asian-inspired dishes. You can also place take-away orders before boarding. Their establishments are situated near gates B and J. Provided that you look for healthy food in Madrid airport, you will surely love the Evian space after security in Terminal 4, boasting a whole range of protein-rich and low-in-calories options as well as the healthiest snacks and desserts (including delicious frozen yoghourts) in the entire facilities.

A blend word formed by combining Mahou (a renowned Spanish beer brand) and Madrid gives name to the Mahoudrid restaurant franchise offering every single typical dish and tapa you need in order to take your first taste of Spain or have the most appropriate farewell-feast before leaving the country. Tortilla de patatas, bocadillo de calamares, paella, croquetas and the best draught beer along with the broadcasting of live sports events, a good ambience and power outlets by the seats make this place a must. They are located in the public areas near arrivals in T1 and T4, in the public departures of T2, and next to gates B in the boarding concourse of T3.

If you have been to the capital city already, you probably know that one of the most popular places to eat in Madrid is Rodilla. Their variety of sandwiches here will amaze you, and at the same time it allows you to have a savoury and light meal before takeoff. Rodilla sandwiches can be found in boarding halls D and K of T2 and T4 respectively. Would you rather go for something more gourmet? We advise you to take time to visit other restaurants in Adolfo Suárez – Madrid Barajas airport, such as “Origins by EnriqueTomás” next to boarding gates J after security in T4 or the “Gastro Hub” before going through the passport control in the same terminal. The first one gives you the chance to taste Iberico ham like you have never before, while the latter is famous for its reinvented tapas.

Do you already have a favourite? While you make up your mind, you can get ready to travel to Madrid.

Hotels near Prague airport in Czechia

Which airport in Guatemala is closest to the best places to visit?